‘The Whole History of Painting Should be Rewritten’. Six Texts of the New Art History. On the book “Take a Closer Look” by Daniel Arasse

In the article, the authors considered Daniel Arasse's (1944-2003) methodological approaches and principles in the book «On n'y voit rien: descriptions». In the six texts of different genres, Arasse proposes new interpretations of paintings, already analyzed by more than one generation of art historians. The texts of the French researcher not only propose new research optics but serve as an example of easy, popular, and at the same time deep way of art or (and) paintings history writing. The place and role of Daniel Arasse in the French intellectual environment have been found out. Also, the influence of André Chastel, Louis Maren, Francis Emilia Yates on the formation of Arasse's interests and research tools has been clarified. The peculiarities of Arasse's approach to the symbols interpretation in the canvases were also analyzed. The French researcher persuaded the meaning of images and work on the whole is often behind the “screen” of quotations and references from other works, which deprives the work of self-sufficiency and meaning. This review demonstrates how Arass interprets the seemingly unobvious elements in paintings, the role of symbols in the composition, and the work's integrity. According to Arass, recourse to iconography is not the main approach. So, the researcher leaves the viewer the right to free interpretation, not overburdened by previous readings and not limited by tradition. The authors considered how Arasse works with the paintings' text and the cultural field in which they appeared. Arasse finds and solves the semiotic «rebuses» of painting images. Specific examples given in the article show when anachronisms in interpretations lead to ahistoricity, and when they help to understand the meaning of visual material better. Semiosis catalyzes the image as an independent actant, which begins to produce meaning visually, according to Arasse. The role of the customer and the artist is leveled out. Moreover, semiosis continues long after their death. In this case, the researcher finds himself in the role of another constructor of concetto. This is more «another» than right or wrong. 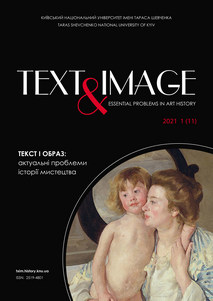